Students were treated to talks from speakers from Greenwich University, EzyEducation, Barclays and BT covering topics such as market structures and studying. Economics at university. We are grateful to the support from our external speakers who included CTK alumni. Student feedback on the day was overwhelmingly positive. 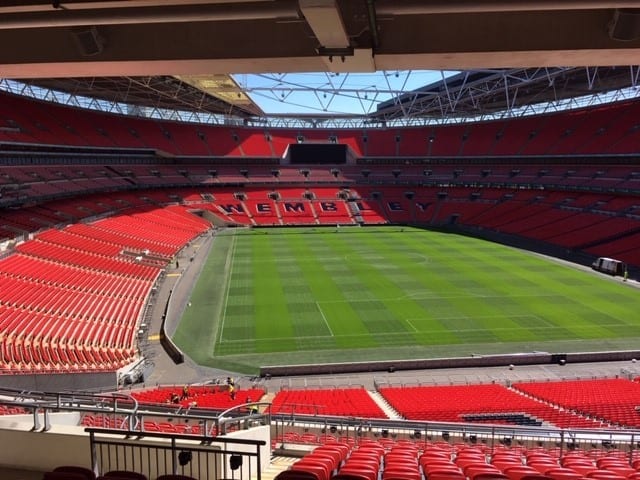 CTK St Mary’s BTEC Level 3 Sport and Science students visited UCFB Wembley yesterday. Students took part in a number of workshop activities centred around the University’s many degrees in the football and sports industry. They were challenged to become an entrepreneur; working in groups to design and pitch a brand new sporting product to their peers. The most exciting part of the day was that students were then taken on a behind-the-scenes tour of Wembley stadium; getting to see the England dressing rooms, the press conference room, player’s tunnel, pitch side and the iconic Royal box. All students were an absolute credit to CTK and thoroughly enjoyed their experience. 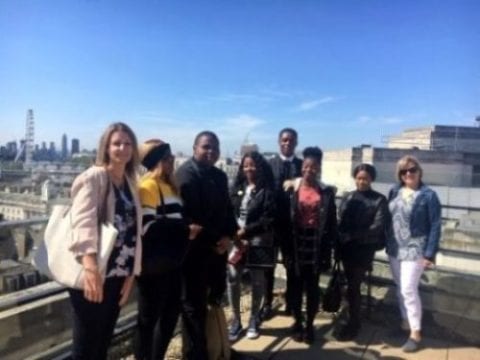 A level French students enjoyed a dedicated translation workshop at King’s college. They learnt the techniques of translation from one language to another. They look at the importance of understanding the text, the context, the period and played with the language. There was also a Q&A about studying at University and the students found the whole experience useful.

French A Level student Taiwo Tinubu was nominated by her peers and teacher for the Jack Petchey awardShe received the award for her kindness, her helpfulness and her calm and positive attitude.

Taiwo decided with her peers to go and watch HighLife a French Film, directed by Claire Denis at the French Institute in South Kensington followed by a French dinner at Cote Brasserie.

The students thoroughly enjoyed the whole experience and were very thankful to Taiwo to have shared her award with them this way. 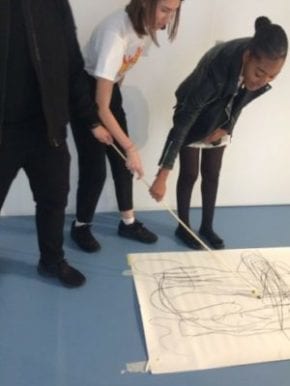 First year photography and graphics students from Emmanuel attended a workshop at Autograph Gallery in Shoreditch earlier this month.

After photographing some of the sights around Brick Lane, we went to Autograph – a gallery whose mission statement is ‘to share the work of artists who use photography and film to highlight issues of identity, representation, human rights and social justice’. In response to the exhibition by Phoebe Boswell, students made collaborative drawings and a sound piece using their mobile phones in the workshop. The drawings were then hung up outside in a space chosen by each group. 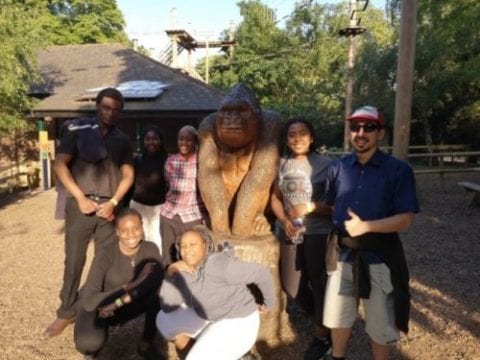 The aims of the Jack Petchey are twofold. It aims to both inspire and challenge young people to achieve what they can be.

Normally this takes place before the award is won, but it doesn’t mean that these are not relevant aims even afterwards. So was the case when one Jack Petchey award winner decided that she would take a group of fellow students to Go Ape Battersea, the treetop adventure course.

Zhanae Payne, who was nominated for the hard work she put into the Chaplaincy Team, decided that the experience would be a beneficial one. The group of students, who were all eager to attend travelled down on Wednesday 15th May after college. It was a fantastic experience. Three courses looped around the trees at Battersea Park, each more challenging, consisting of ropes, bridges and ziplines.   Those who were afraid of heights all managed to overcome their fears and by the end everyone was confidently stepping around the course. It was a truly memorable experience, and brought the group closer, as they supported and encouraged each other around the course. 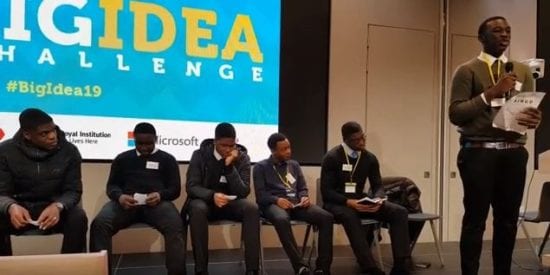 Congratulations to our Level 2 Business Studies students who received the Runner Up award at the London Metropolitan University’s Big Idea Challenge finale on the 2nd of Mary 2019.

Our students beat 18 other colleges with their business idea “Enough is Enough” (see it here http://bit.ly/2I5DlQt). The finale event was held at the Royal Institute in Mayfair and was attended by Levi Roots, the founder of Cobra Beer and the founder of Mumsnet so it was surely a night to remember! 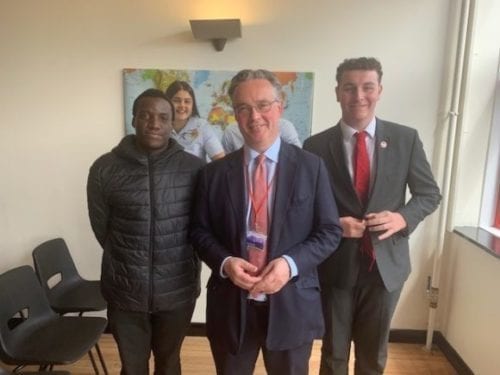 Law and Politics students from CTK St Mary’s were delighted to hear a talk from Gary Gibbon who has been the Channel 4 News’ Political Editor since 2005.

In a highly informative talk, followed by Q & A, Gary gave students his take on the latest news and gossip from the corridors of power in Westminster and beyond.

Gary has worked on five general elections for Channel 4 News. His interview with Peter Mandelson in 2001 triggered the Northern Ireland Secretary’s second resignation from the Cabinet. In 2006, he won the Royal Television Society Home News Award with Jon Snow for the scoop on the Attorney General’s Legal Advice on Iraq.

Students left the talk with a deep insight into the world of Politics which will no doubt help them in their upcoming A Level exams. 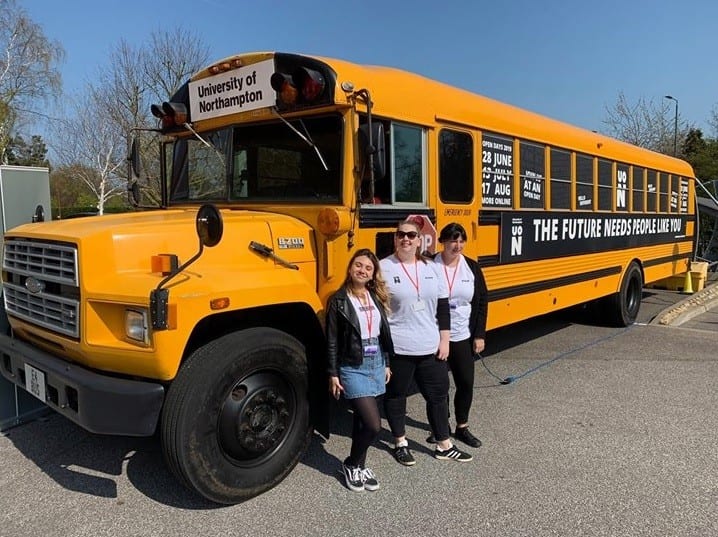 Students were given the opportunity to climb on board for interactive sessions on university applications with their Schools Liaison team. There was also the opportunity to speak to current Northampton undergraduates about their own experiences since joining the university.

The Tour was supported by a number of on air and online platforms as well as it being documented on social media. 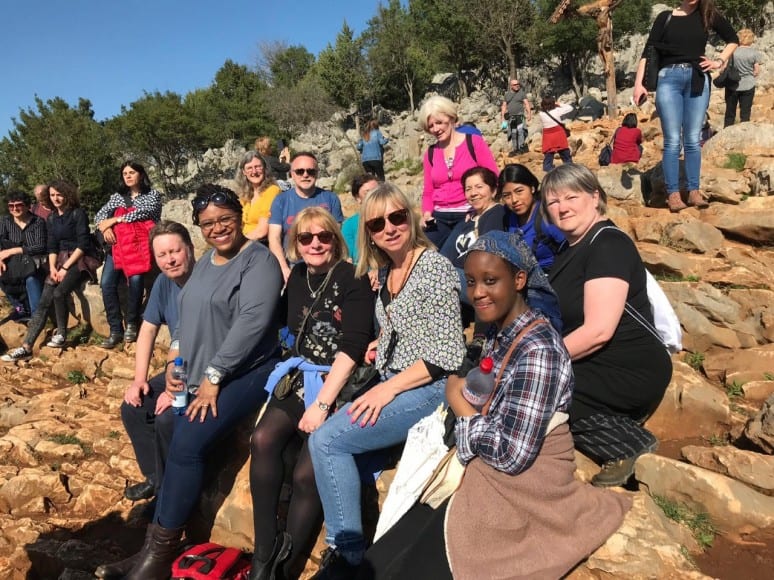 A member of staff was keen that the community at Christ The King made a pilgrimage to Medjugorje. A group of sixteen staff and students set off just before Easter.

They quickly settled into the prayerful routine of the place which is in Bosnia Herzegovinia.  Christine the guide who accompanied the group up Apparition Hill carefully explained the history of the place from when our lady first appeared at Medjugorje in 1981 at which  the country was under the reign of Communism.  Fr Leon who is the English chaplain and who has visited Woolwich talked to the group of his own religious experience Visits were also made to Mary TV, Mostar and Cross Mountain. Personal experiences included the ineffable quality of the music at international services, the smell of the roses, and the meaningful conversations end encounters that occurred.

Our Lady asks pilgrims to promote Medjugorge as the spiritual centre of the world and that we carry out the following;  read the Bible, go to confession, receive the Eucharist, fast of Wednesdays and Fridays and say the rosary.  To help us remember we can carry five small stones from Medjugorge.  The community at Christ the King offers an annual pilgrimage as part of its Catholic life programme. This pilgrimage to was exceptional because of its uniqueness.  Everyone in the group returned home a little bit changed for the better and would recommend to all.  It was perfect in every way.  You will not be disappointed. 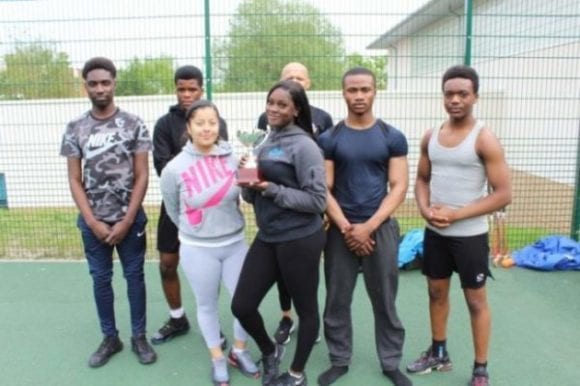 On a beautifully sunny day last Wednesday, Christ the King Sixth Forms held its much anticipated annual Sports Day with events taking place across all 3 sites.

The competition between students was there for all to see but the gracefulness and comradery which shone through is something they all should be proud of.

On the football pitch, it was St Mary’s who ran out winners after achieving a hard fought 1-0 victory over Emmanuel with everyone getting the chance to be involved in the match and all enjoyed themselves.

Heading inside, onto the basketball court, a rivalry had been building over the past few months during the basketball season. Emmanuel had taken the early bragging rights but the St Mary’s team had come roaring back in recent weeks. It all came down to the final opportunity on Sports Day. With the Aquinas team added to the mix, it was sure to be an afternoon to remember. And so, with St Mary’s coming through victorious against both Emmanuel and Aquinas, they were crowned champions. With Aquinas pulling off a fantastic win against Emmanuel, they took a well-deserved second place, leaving Emmanuel third.

Netball and Futsal were both held at Aquinas, and it was Emmanuel who came away winning both events. The futsal was very competitive, as expected, with Emmanuel beating Aquinas 13-5 to claim maximum points.

Both Table Tennis and Badminton took place in the St Mary’s sports hall and it was a real hive of activity. Some very good talent was put on show with a lot of exciting matches taking place. In the end, a very skilful Aquinas team took the honours in the table tennis with Emmanuel pulling through against tough opposition in the badminton.

The new event this year ‘Mini Olympics’ proved to be a hit and was well enjoyed by all who took part. Events such as standing long jump, bean bag throwing, soft javelin throw and fun relay races took place with Emmanuel taking the gold ahead of St Mary’s in the male competition and Aquinas winning the female competition.

The ‘Gym Challenge’ ended up being very closely contested with the will to win being shown in abundance. Strength, flexibility, endurance and aerobic testing are all elements of the challenge and each competitor showed immense grit and determination in each. It was St Mary’s who scraped it in the end ahead of Emmanuel.

Overall, congratulations go to Emmanuel who triumphed on the day ending with 190 points followed by St Mary’s on 170 points and Aquinas with a respectable 140 points. Everyone who took part enjoyed the day and we look forward to a fresh competition next year.